Have you ever imagined that you could find a powerful weapon of protection in your kitchen’s spice cabinet?

Your kitchen is usually not the first place you go to for cooking food but also can be a medicine hub. when trying to protect yourself and your family from diseases and infections, Cinnamon can be a lifesaving tool.

Cinnamon has been consumed since 2000BC and it is one of the oldest and most potent spices known. It can improve your health. Cinnamon, which is famous for its sweet fragrance, has been used for its culinary and medicinal properties for many centuries now.

Let us talk about the reasons researchers ranked Cinnamon the number one medicinal spice. 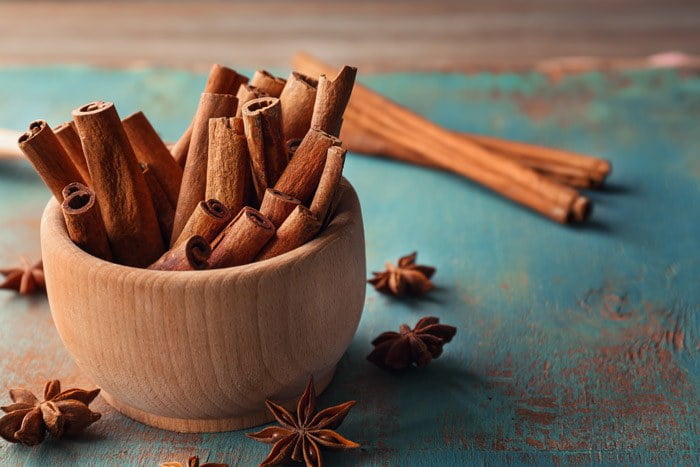 1. Cinnamon Fights Against Viruses and Infections

It has a distinctive flavor and aroma that is caused by Cinnamaldehyde. Cinnamaldehyde is a compound that is found in the oily bark of the Cinnamon tree.

Cell membranes of infections like Staph Aureus and E. Coli can also be damaged by Cinnamaldehyde, thereby fighting off viruses and infections in the body. (1)

2. Cinnamon May Fights Against Cancer

When someone has cancer, their cells begin to mutate, and then there is damage to the victim’s DNA.

Cinnamon slows the growth of breast cancer cells. Cinnamon oil treats Gastric Cancers, Melanomas, and Tumors. Colon cells can be damaged by bile salts, so cinnamon removes bile salts from the liver and colon, thereby having a protective effect against liver and colon cancer. (2), (3), (4), (5), (6)

Ceylon Cinnamon is a strong weapon against cancer, as it has antioxidant, anti-inflammatory and antimicrobial properties.

It contains high levels of flavonoids, polyphenols, and phenolic acid. Antioxidants which are often found in red wine, dark chocolate and berries help in slowing the process of aging, by decreasing the damage done to the body. (7), (8), (9), (10)

Inflammation can slow you down and make you unable to be the best you want to be. Allergic reactions and swollen joints are signs that a person’s body is distressed. Cinnamon reduces inflammation by decreasing the amount of nitrous oxide in the muscles. (11), (12)

The amount of swelling is decreased by the high levels of antioxidants contained in Cinnamon and this helps the body to easily recover from stress or injuries.

Since monitoring the sugar level for people with diabetes is important, many people search for foods that can lower blood sugar.

Studies have shown that Cinnamon helps with insulin resistance and controlling type-2 diabetes. The blood sugar levels are controlled by improving the response of the body to the insulin hormone. (13), (14)

It is known that Cinnamon has inflammatory properties. Arthritis is inflammation at the joints which can cause swelling, redness, and pain in joints, when cinnamon is applied to the painful parts of the body and properly massaged into the skin. It helps in relieving the stiffness and pain.

Cinnamon helps in building bones. It also helps in renewing the blood and other connective tissues due to its high levels of manganese.

6. Cinnamon Increases the Function of the Heart

Cinnamon reduces your levels of LDL or bad cholesterol and then stabilizes your HDL or good cholesterol, thereby increasing the health of your heart. (15)

We all know that a good organ is necessary for survival, so it is good that Cinnamon protects the heart.

Cinnamon decreases your chance of having a stroke or heart disease by reducing high blood pressure. Its antioxidant effects include helping your body to heal the tissues that are damaged, and this includes your heart.

Cinnamon has antibacterial and warming properties, which help to relieve soreness in the throat.

It is usually mixed with honey or boiled in hot water to treat cough and cold. Also, Chinese traditional medicine is known to recommend cinnamon for phlegm coughs.

Cinnamon makes the skin glow. Even though you may not need for a glowing skin high up on your survival needs list, it still feels good to have a glowing skin.

When Cinnamon is mixed with honey, the mixture can be used to prevent infections, rashes, and allergic reactions. It can also clear up redness, swelling, and acne.

The anti-biotic and anti-microbial abilities of Cinnamon makes the skin healthy by protecting it from irritants. Healthy skin keeps you healthy.

Poor sanitation, unbalanced diets, medications, and the environment can cause yeast infections.

One of the scientific names for yeast is called Candida. A very small amount is naturally found in your intestines to help with digestion and also in your mouth.

Cinnamon is probably the best natural treatment for Candida yeast infections since it has antibacterial and antifungal properties.

It acts as an anti-fungal that affects the Candida cells directly. It works by damaging yeast cells, thereby causing them to die off. Cinnamon reduces inflammation in the digestive tract and increases the health of the immune system.

You have a lower chance of having infections and a higher chance of survival when your body is functioning well. It would be greatly beneficial to have Cinnamon included in your diet if you want to fight off Candida yeast infections.

Protecting your brain is very essential for healthy living. Cinnamon is good for brain health.

Studies have shown that cinnamon has the ability to protect the brain from the development of diseases like Parkinson’s and Alzheimer’s; it does this by decreasing the amount of damage to the brain’s cell structures. (16), (17), (18)

Cinnamon’s scent has the ability to boost memory in a task. Studies have shown that people who smelled cinnamon had increased brain activity, thereby performing better at tasks that are related to memory, attention and visual-motor speed.

The antioxidant and anti-inflammatory properties of cinnamon reduce mental stress and help the brain function at its very best.

When taken in the recommended doses, Cinnamon has no side effects.

High doses of Cinnamon essential oil can be toxic, so care should be taken while consuming it. Cinnamon oil is used in chewing gums, mouthwashes, breath mints and toothpaste.

Cinnamon has anti-bacterial properties, which helps to get rid of harmful bacteria, and it does this without hurting the gums or teeth.

A toothache can leave you unhappy, moody and in pain for days.

Cinnamon oil fights against the infections in the mouth and it can be used as an alternative to other antibacterial compounds to fight the bacteria responsible for oral infections. (19)

HDL is good for the body while LDL is bad for the body. Cinnamon alters the ways in which the body processes fats and sugar, thereby indirectly controlling cholesterol.

13. Cinnamon is a Preservative Wonder

It has been known to prevent the growth of bacteria and fungi, including yeasts. Cinnamon is used as a preservative in foods. It prevents food spoilage due to its ability to fight viral elements in foods.

Recent studies have shown that cinnamon may be able to prevent Alzheimer’s.

Cinnamaldehyde and Epicatechin which are the two compounds found in Cinnamon may be effective in fighting Alzheimer’s. Cinnamon helps neurons and improves motor function in the people that are suffering from Alzheimer’s or Parkinson’s.

The effects of five aggressive strains of Alzheimer’s inducing genes can be delayed by cinnamon, according to evidence from a study that was done at the University of Tel Aviv, Israel.

Cinnamon helps in managing the symptoms since Alzheimer’s and Parkinson’s are incurable.

Herbal teas can be made using Cinnamon water; this helps in weight loss.

Cinnamon has blood-thinning properties that are useful in reducing the risk of blood clots and keeping circulation healthy.

Thinner blood and better circulation lead to a higher metabolic rate then the excess weight is kept off.

Many benefits can be enjoyed from this exotic spice. You can take it as a supplement, traditional medicine or even include it in your diet to enjoy its benefits. 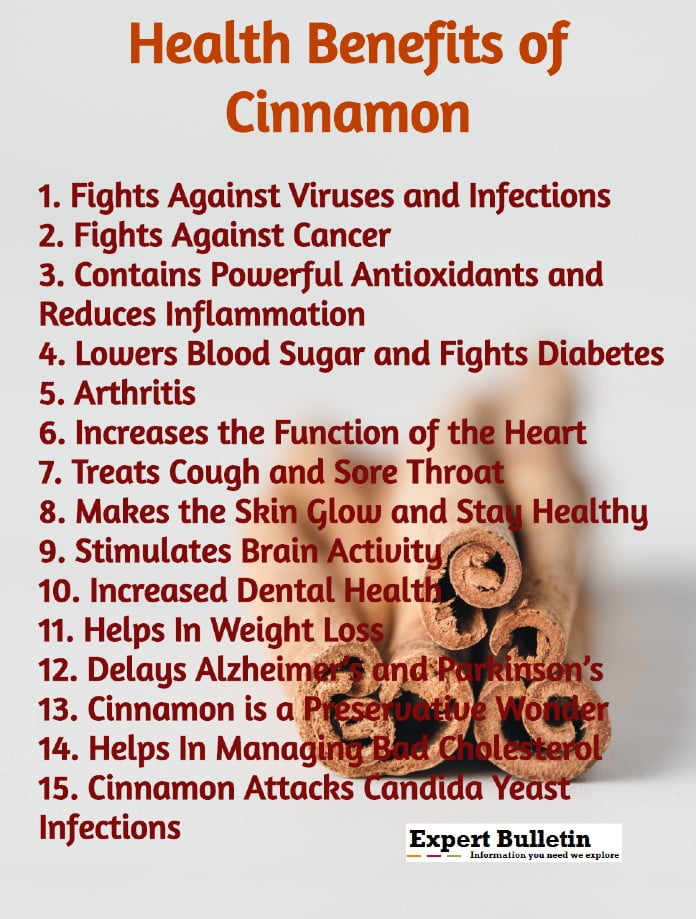 How many types of cinnamon and which is the best?

How much cinnamon should you take per day?

A high dose of cinnamon may be toxic and may have some side effects. The recommended dose is 1/2 to 1 teaspoon (2-4 grams) of powder a day.

Are there any side effects of cinnamon?

A high dose of cinnamon may cause some side effects like liver damage, low blood sugar and low blood pressure, and allergies.

Cinnamon may help to reduce weight because it has blood-thinning properties and effect on blood glucose levels.