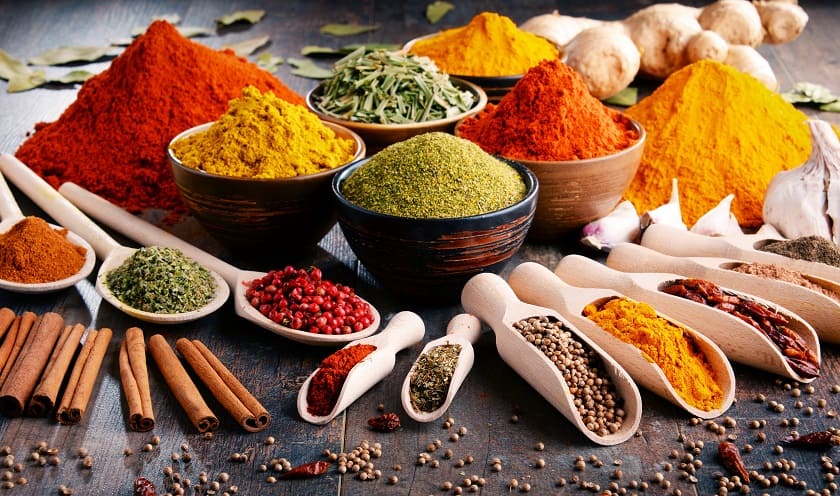 In the article Ginger and Spices for Your Health, the author covers common uses for everyday spices. This article focuses on the world’s 8 healthiest spices, not herbs.

It will provide information about the actual health benefits, quick ideas for recipe inclusion, and nutritional qualities of the world’s 8 healthiest spices.

One of the main advantages of cooking with spices, preferably freshly ground, is that they offer delectable flavors without adding fat, cholesterol, sugar, or sodium. The calories of spices are insignificant, and some even add an unexpected amount of dietary fiber to your food.

Using freshly ground spices in your cooking food is an easy and effective way of making healthier dishes and adding flavors that cannot be found in other non-natural and processed ingredients.

Either purchases a pepper mill and fill it with black peppercorns, white peppercorns or red peppercorns, or a mixture, or buy one of the McCormick pepper mills in the spice aisle. The already-ground pepper that comes in tins tastes like dirty sawdust compared to freshly ground pepper.

Pepper is the world’s healthiest spices. Its positive effect on the digestive tract. It also has antibacterial and antioxidant benefits. Pepper is a good source of Vitamin K, Calcium, Vitamin A, Copper, Iron, Manganese, Magnesium, and Potassium.

It is the best healthiest spices because it is also a good source of Vitamin C, Potassium, Vitamin A, Iron, and dietary fiber.

If you cringe when you think of cinnamon because the ground cinnamon you’ve tasted is bitter, try using Chinese Cinnamon. Chinese Cinnamon is sweeter and has no bitter flavor. For a healthy snack or fruit dip, combine equal parts non-fat vanilla or plain yogurt with unsweetened applesauce. Add cinnamon, and you have a healthy and nutritious snack.

Ground Cinnamon is not only very low in sodium and cholesterol, but it is also low in saturated fat. It also boosts your vitamin intake with its Vitamin C, Iron, Manganese, and Vitamin K.

Cinnamon has health-encourage properties, making it one of the world’s healthiest spices. It promotes anti-clotting, can control blood sugar, and improves digestive health.

Cloves are one of those spices that an unseasoned cook may not use much. It can also be used in Swedish meatballs, with dishes using beans, and in delicious desserts like Molasses Cookies, Pumpkin Pie, Gingerbread, and Ginger Snaps.

One of the world’s healthiest spices, clove, adds Beta Cryptoxanthin, Calcium, Magnesium, Potassium Vitamin A, and Vitamin C to your food.

Healthwise, cloves can be used to treat digestive tract cancers. Cloves are also offered anesthetic and anti-bacterial qualities and are used in oral care products, as well as in substances used by dentists.

Because ginger is a root, it is considered a spice and not an herb. It can be added to chicken, beef, or vegetable dishes, as well as desserts like Gingerbread.

Ginger, like most spices, is in cholesterol, low in saturated fat, and low in sodium. Ginger is one of the effective healthiest spices. It provides Manganese, Potassium, Copper, Magnesium, and Vitamin C.

Ginger is a great way to quell motion sickness. It also has some anti-inflammatory benefits.

It refers to actual mustard seeds, or ground mustard, not that bright yellow concoction in the familiar pull-top bottle. Mustard adds depth to any chicken dish or cold potato salad. Mustard can also be used with a vinaigrette to make a delicious cold or warm dressing.

These seeds are one of the world’s healthiest spices because they are good sources of calcium, iron, magnesium, phosphorus, and protein, as well as Lutein and Zeaxanthin. They also boast omega 3 fatty acids.

Mustard seeds are also a great source of selenium. Selenium is considered to have cancer-prevention qualities, anti-inflammatory qualities, and can even lessen the severity of asthma.

A popular ingredient in curry powder, turmeric is part of the Ginger family, another one of the world’s healthiest spices. Turmeric is tasty when cooked with lentils and other vegetarian dishes.

Turmeric is considered one of the healthiest spices because of its anti-inflammatory qualities. It aids in digestion and also helps heal wounds.

It’s probably not a good idea to stop taking your multi-vitamin because you are using spices. By cooking with the 8 world’s healthiest spices, you can feel good knowing that by adding distinct flavors to your foods you are also improving your health.