The Many Benefits of Sesame Seed And It’s Oil 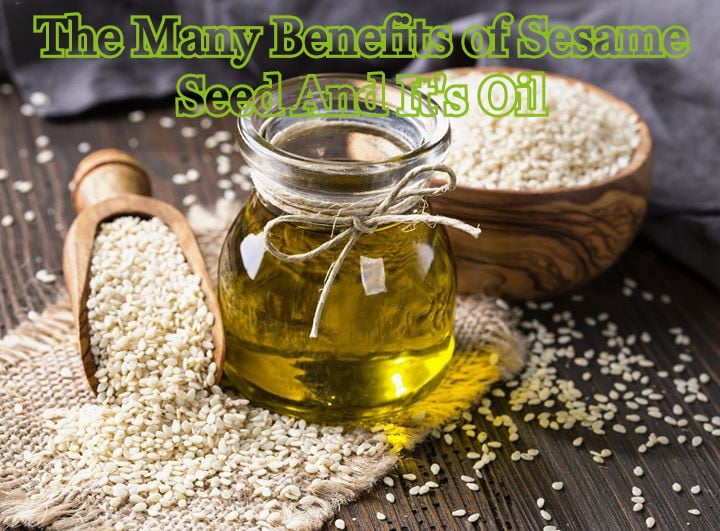 History tells us that the sesame seed is the first recorded seasoning. In the Middle East, in the early civilization of Assyria, sesame oil was born. It was presumably the first vegetable oil-well ahead of olive oil.

What are the Benefits of Sesame Seed?

Sesame plants can be found in Asia, North Africa, Central America, China, India, Japan, Mexico, and the United States. The seed arrived in the U.S. when African slaves carried them here. Sesame seeds are produced in relatively hot and dry regions because the plants are adaptable and drought resistant.

The sesame seed is full of nutrition and contains no cholesterol. Sesame seeds contain high quantities of methionine and tryptophan, which are amino acids missing from other vegetable protein sources that are important for healthy liver and kidneys and the utilization of B-complex vitamins.

Sesame seeds, also known as benni-seed, sim, and til, are used by people around the world in many ways. Cooking oil, which is extracted from sesame seeds is the seed’s main use, especially in Asia. In North American and Europe, raw sesame seeds are mostly used as a topping on bread such as hamburger buns, bagels, breadsticks, and the like. Middle Eastern countries use sesame seeds for tahini paste, halvah, and oil.

Sesame oil comes in two basic types. One is light in color and flavor and has a delicious nutty suggestion. The darker, Asian sesame oil has a lot of stronger flavor and fragrance and is used as a flavor accent for some Asian dishes.

Sesame seeds oil is high in polyunsaturated fats ranking fourth behind safflower, soybean, and corn oil. The average smoke point for sesame oil is 420 degrees Fahrenheit, which makes it excellent for frying.

Sesame seeds come in black, white, brown, and red. Here in the United States, we use more white seeds than black, mostly in bread and bread products. In Asian countries, the opposite is true.

The main use of black sesame seeds is to encrust fish or meat dishes. This serves many purposes; it flavors the meat or fish with a pleasant nuttiness and also helps to seal in the juices during cooking. Black sesame seeds are also tossed into stir-fry and used as a seasoning in rice, vegetables, and salads.

You can purchase sesame seeds packaged in a grocery store or bulk at a middle-eastern grocer or health food store. They should be stored in an airtight container and will last up to 6 months in a refrigerator and a full year if frozen.

3. Reduce the Risk of Cancers

Sesame seeds contain two different substances: sesamin and sesamolin. Both of these substances belong to a group of beneficial fibers called lignans, which have been shown to have a cholesterol-lowering effect. Additionally, sesamin has shown to protect the liver from oxidative damage.

Sesame seeds are also a good source of phytosterols; compounds found in plants that have a chemical structure similar to cholesterol. When phytosterols are present in the diet in sufficient amounts, they are believed to reduce blood levels of cholesterol, enhance the immune response, and decrease the risk of certain cancers. According to a study published in the Journal of Agricultural and Food Chemistry, sesame seeds contain the highest total phytosterol content (400-412 mg per 100 grams).

Sesame seeds are a rich source of copper and calcium. A quarter-cup of sesame seeds provides the body with 74 percent of the recommended daily allowance (RDA) of copper, 31 percent of the RDA for magnesium, and 35 percent RDA for calcium.

Copper is known for its use in reducing inflammation and pain caused by rheumatoid arthritis. Copper also plays an important role in the activity of lysyl oxidase, an enzyme that links collagen and elastin, which provide strength and elasticity in blood vessels, bones, and joints.

Sesame seeds are an excellent source of copper and calcium. These seeds are also a good source of manganese, iron, phosphorus, vitamin B1 (thiamin), zinc, vitamin E, protein, and fiber.

Sesame seed oil is an effective healing oil for thousands of years. It has natural antibacterial and antiviral properties. It is used to treat common skin pathogens such as staphylococcus and streptococcus. Sesame seed oil also cure common skin fungi such as the athlete’s foot fungus.

Sesame seed oil is a natural anti-inflammatory agent. In India, it has been used in experiments to unblock arteries. Ayurvedic physicians in Holland have used the oil to treat chronic diseases such as hepatitis, diabetes, and migraine headaches.

Sesame seed oil can be used as nose drops for chronic sinusitis and as a throat gargle to kill strep and common cold bacteria. It has proven helpful for sufferers of psoriasis and dry skin ailments and has been successfully used to kill lice infestations in the scalp and hair of children.

When applied to the skin after exposure to wind or sun, sesame oil can calm the burning sensation and provide healing properties to the skin. Sesame seed oil can also protect the skin from the effects of chlorine in swimming pools. The sesame seed oil has shown promising benefits of neutralizing oxygen radicals when used on the skin before and after radiation treatments.

Teens can use sesame seed oil to help control acne eruptions and neutralize the toxins which develop both on the skin’s surface and in the pores. Adults can benefit from the skin tightening benefits of sesame oil.