The Difference Between Canker Sores and Cold Sores 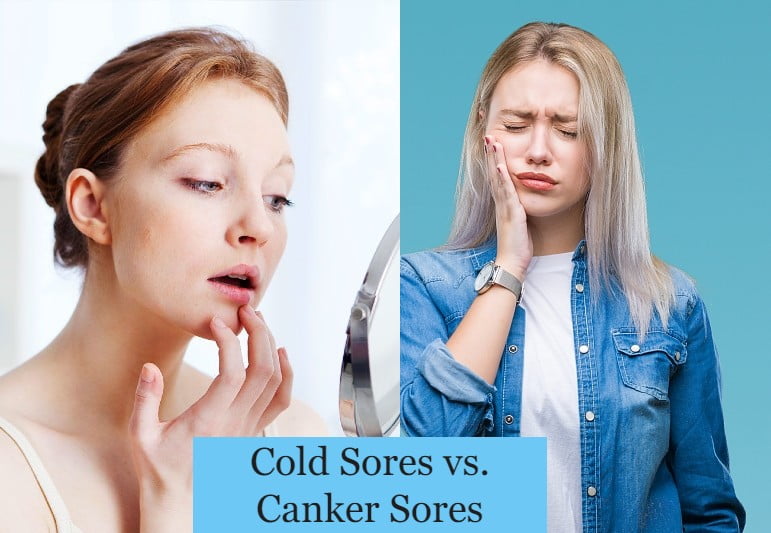 Cold Sores vs. Canker Sores: What Are They and How Do I Get Rid of

You may feel the itching and the tingling before anything can manifest its self. Before the swelling, the redness, or the blisters actually exist you will probably know that something is amiss.

If you’ve ever had one before you recognize the symptoms of the canker sore. It hurts, it’s miserable and it is downright embarrassing after you finally admit you might have one.

Do you need to hide? Can you give it to someone you shake hands within the store?

You or someone you know has probably suffered from this malady. Statistics show that 1 in 5 people get canker sores. Canker sores also show that they may run in families.

Having a parent that has suffered from canker sores raises your chances to 90% that you will have them too.

Also known as aphthous ulcers or canker sores occur on the soft tissue of the inside of the lips, mouth, or throat. The ulcers can also appear occasionally on the tongue.

Cold Sores are the ulcers that appear around the lips, chin, and sometimes on the insides of the nostrils. These ulcers are caused by the Herpes Simplex Virus 1.

Herpes simplex 1 or cold sores can be spread by infected saliva and by adult-hood nearly 90 % of men and women carry the virus.

This condition is not to be confused with Herpes Simplex 2 can be spread by sexual intimacy and is usually found from the waist down. Women giving birth can pass the virus on to the newborn baby during the process of giving birth.

There is no cure for this STD. There is a treatment to help prevent outbreaks which is an active period in which blisters form.

The genital version of this malady is called Genital Herpes. Cold sores or Herpes Simplex 2 is not the same as canker sores.

Canker sores appear showing up as red spots sometimes measuring up to 1″ or 2.5 centimeters though usually, the ulcers are much smaller.

It can also occasionally appear in clusters. After the sore or ulcer appears it may swell and burst to leave an open ulcer behind that can be coated in white or yellow surrounded by a dark red halo or ring.

The blister or ulcer may take as long as two weeks to completely heal. The first three to five days are the most painful, causing problems with eating, drinking, and sometimes speaking.

On occasion, other symptoms may present themselves along with the ulcers. These can be fever, swollen lymph nodes, and lethargy, or a general feeling of being unwell.

The causes of canker sores

The causes of canker sores are not completely known, though poor nutrition seems to be one factor.

The lack of folic acid, Vitamin B12, and low iron content in the body appear to cause mouth ulcers in some people.

Other causes that can be responsible are;

Canker sores may also be an indication of a declining or problematic autoimmune system.

Studies done on college students showed that during times of high stress, such as the periods of exam-taking, the incidence of canker sores rose dramatically.

During periods of calm such as vacations, the number of sores decreased. Though anyone of any age can get canker sores younger people, teens, and people in their 20s seem to get the ulcers more often.

How to Treat canker sores?

There are many over the counter (o.t.c.) remedies available for easing the painful side-effects of canker sores. Price ranges vary, but some of the lesser costing products can work as well as the more costly medications.

Products containing carbamide peroxide may be quite effective. They are made up of peroxide which is a cleaning agent and glycerin which helps to coat the sore. Many over the counter products contain benzocaine, menthol, or eucalyptus.

These products may sting quite a bit but can reduce pain and hasten healing time.

There are also some home remedies. These can be effective in treating the side effects of canker sores. Here are a few that may work for you.

1. Rinse up to four times a day for a minute each time using 2 oz. of water mixed with 2 oz. of hydrogen peroxide.

Do not eat or drink for 30 minutes after treating the area. You may also use cotton swabs or Q-Tips to swab each individual ulcer.

To ease pain without using the medication you may also swish milk of magnesia around in the mouth and then spitting it out.

The milk of magnesia coats the ulcers and eases the discomfort temporarily. Some doctors may prescribe a treatment of wet black tea bags applied directly to the sore. The black tea contains tannin which is an astringent and can relieve pain.

If you or your child develop more than two episodes of canker sores a year. Your doctor may want to check for dietary insufficient or autoimmune problems.