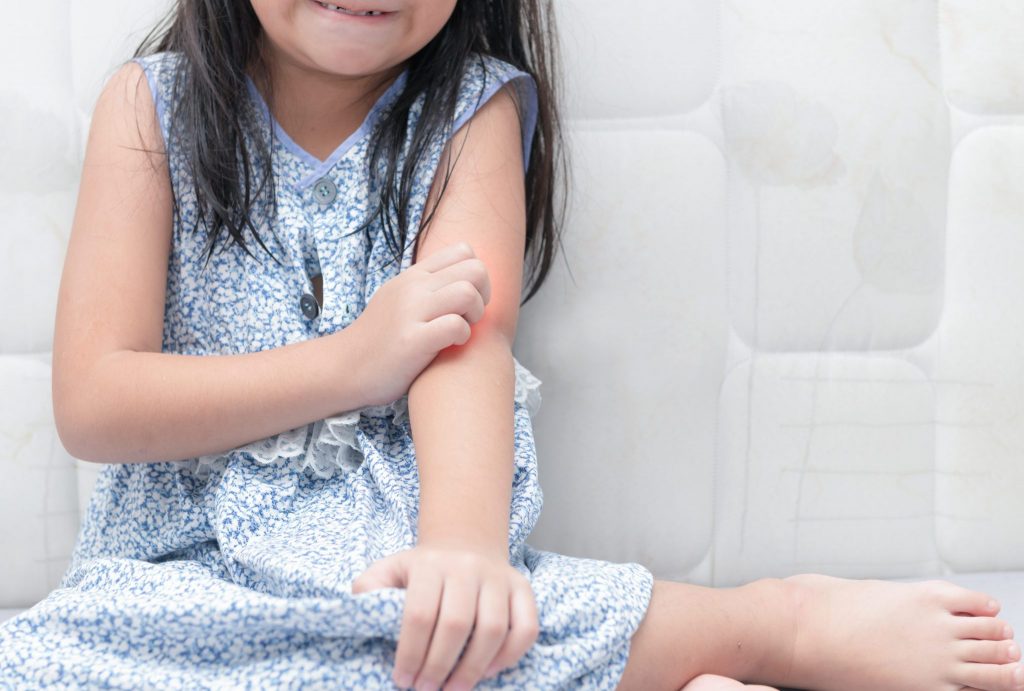 Psoriasis in the most basic sense is a patch of overgrowth of rapidly reproducing skin cells. There is a genetic and an immune system component to psoriasis, with a child being much more likely to have psoriasis if another close relative also has it. But, it is important to note, psoriasis is not contagious.

Most skin cells take an overage of a month to mature and reproduce,. The kin cells in a patch of psoriasis may mature in as few as 3 days. Normally skin cells shed, or fall off after maturing, but with psoriasis, the skin cells stay and pile up, causing thick rough scaly patches of skin. These scaly patches may be red and itch. Many times the scales of skin are silverish.

How to Diagnose Psoriasis in Children?

Most people who are diagnosed with psoriasis have the first notable outbreak when they are a teenager or young adult. Approximately 2.5% of the population has psoriasis in the U.S. alone. About 20000 children are diagnosed each year. These are children under 10 years old. Psoriasis affects boys and girls at the same rate. Those of Scandinavian and Western European heritage have an increased risk of psoriasis, but it is seen in all races.

What Causes of Psoriasis?

The exact cause of psoriasis is unknown, but research seems to indicate that there is usually some type of “trigger” that sets off the white blood cells of the immune system, which then activate the skin cells to start maturing and reproducing rapidly.

There is a wide range of triggers that may set off the beginnings of psoriasis in a child. These triggers can range from a recent strep infection, to sunburn, to injury, and even emotional stress. The specific triggers can be related to the type of psoriasis that is manifested. There are several types.

Although children suffer from the same varieties of psoriasis as adults. The presentation of it may be different a frequently, children may present with symptoms that are atypical. This makes diagnoses more difficult in children. Many times the areas are not as thick and scaly in children. The diaper area and face are affected much more often than that for adults with this autoimmune disease.

For a more definitive diagnosis, the scales may be taken off and sent for laboratory analysis. When the scales are scraped off, if it is true psoriasis. There is usually the telltale sign of pinpoint bleeding noted beneath where the scales where.

Types Of Psoriasis And Their Symptoms

Symptoms of psoriasis in children

Some of the more typical symptoms of the most common type of psoriasis is red bumps or plaques on the skin covered by thick grayish-silver colored scales. It is commonly found on the knees and elbows and these patches may sometimes itch and burn. 9 out of 10 people with psoriasis have this type which is called Plaque psoriasis.

Types and symptoms for the other types of psoriasis may include pustules on top of the scaly patches, commonly found on the palms of the hands and soles of the feet in Pustular psoriasis.

Guttate psoriasis is much more common in children than adults. It is show pink teardrop-shaped lesions with very fine scales that itch. These are most often found on the trunk of the body. It can also the arms, legs, scalp, ears, and face. This type of psoriasis most often appears after a bout of strep throat. It may spontaneously resolve after a few months, or it may become a chronic condition.

Inverse psoriasis appears as smooth, shiny, red lesions without scales, and some children may suffer form a type of psoriasis that affects the fingernails and joints.

Aside from the few cases that spontaneously resolve, childhood psoriasis, for the most part, is a chronic disease with no “yet” permanent cure. The current treatments aim at reducing the frequency and severity of the flare-ups. Treatment results in children can vary widely.

In some children, the treatments may result in complete healing of the psoriasis areas in between flares with them being completely unnoticeable, while in others, treatment results may only appear as a flattened or less red and prominent area of psoriasis.

The side effects of this type of treatment include atrophy, or wasting, of the skin, stretch marks, and in rare instances, pituitary suppression.

To lessen these effects, this treatment may be alternated with coal tar preparations.

For a more natural approach to treatment, there are other options. Vinegar dips are a popular treatment with few if any side effects.

As an alternative, cotton balls or gauze may be dipped onto the solution and then applied to the affected area.

You should massage the area with warmed olive oil. After that taking a bath with some mineral oil added. It may also help in psoriasis. Many doctors have long promoted the use of plastic wrap. To cover the area of psoriasis in an attempt to help it to heal.

Capsacian creams, which contain the natural chemical responsible for making chilli peppers hot, can also be effective with repeated use. Great caution should be used with this treatment in young children though as painful damage may occur if the cream were to get into the child’s eyes.

Salicylic acid, which is active ingredient in aspirin and comes from the bark of the Willow tree can be effective when used as a cream to the area of psoriasis. Some supplements, such as fish oil can also be helpful.

No matter which treatment regiment you prefer, it is usually a recipe of trial and error to find which regimen is most effective for a particular child.

Support For Children With Psoriasis

Helping your child to cope with psoriasis is an important function as a parent. Children are more sensitive to the emotional effects of psoriasis than adults due to their focus on appearance during the school age years along with the distraction and decreased quality of life that can occur from the itching and painful lesions which may affect not only the ability to concentrate on things such as school, but may also affect their ability to play and participate in some sports activities.

It is important to let children know that they did nothing to cause the disease, and peers, along with adults they are in contact with, such as teachers and parents of their friends, should be educated and instructed that the disease is not contagious.

The National Psoriasis Foundation offers support groups and youth programs for children of different ages who suffer with psoriasis. Nothing gives a child a sense of belonging more than knowing and interacting with children who are like them and understand what they are going through on a daily basis. This type of support can bring a sense of empowerment to these children and help them immensely.

It is also important to listen to the child’s feelings without telling them the feelings are wrong. Expressing these feelings gives them an outlet without having fear of reprisal

Helping the child to identify and decrease the triggers which cause their flare-ups is also very important. Some times it is not easy to identify the triggers, as they can be different for each individual child, but keeping a journal may help.

Taking care to see that the child has a nutritionally sound diet is also of importance, because this helps to support the immune system which has gone awry in many cases of psoriasis. Getting plenty of rest and exercise is also important for avoiding flareups.

With a good support system full of care and understanding, most children are able to deal with psoriasis in a healthy way without destructive emotional effects.