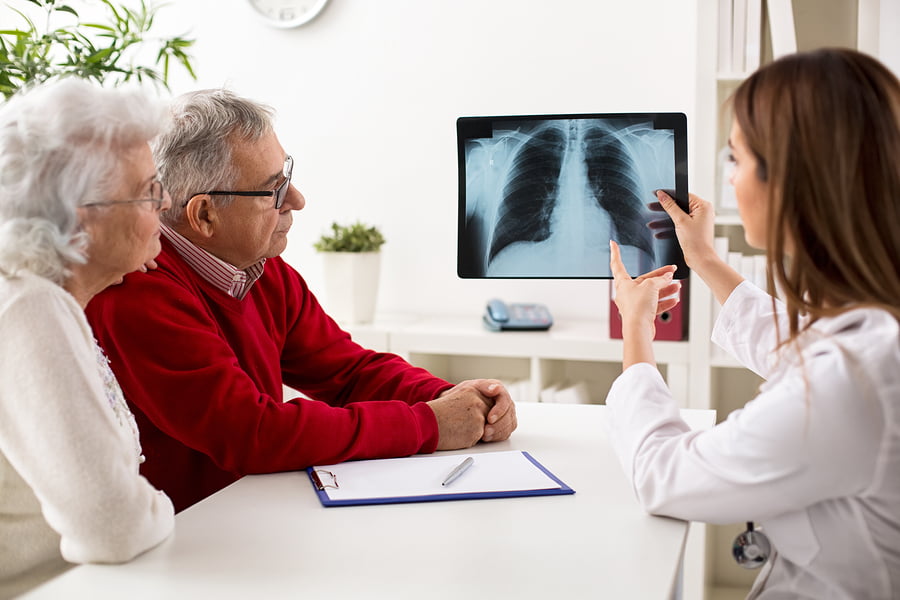 What is Lung cancer?

The lungs are the organs included in the respiratory system. These are responsible for performing a respiratory function. They supply oxygen to the body and expel carbon dioxide. A waste product produced through the body’s cells.

Lung cancer occurs when there is an exaggerated growth of malignant cells in this organ. If it is not diagnosed in time, time metastasis can occur, in these cases, the cancer cells move to other organs of the body.

It is the most frequent cause of death from cancer in both men and women.

What Causes of Lung cancer?

The reasons that can cause Lung cancer to appear are:

It is the main cause. Tobacco smoke, with its high concentration of carcinogens, goes directly into the air and is inhaled by both smokers and non-smokers.

Quitting smoking significantly reduces the risk of developing this pathology as well as contracting other tobacco-related diseases, such as heart disease, emphysema, and chronic bronchitis.

Radon is a radioactive gas found in the rocks and soil of the earth. It is formed by the natural decomposition of radium. Being invisible and odorless, the only way to determine if you are exposed to gas is to measure its levels.

The asbestos is perhaps the best known of industrial substances related to lung cancer, but there are many others such as uranium, arsenic, certain products derived from the oil, etc.

Cancer is known to be caused by DNA mutations (changes), which activate oncogenes or cause tumor suppressor genes to become inactive. Some people inherit DNA mutations from their parents, which greatly increases the risk of developing cancer.

People at risk include miners who have the potential to inhale radioactive minerals, such as uranium and workers exposed to chemicals such as arsenic, vinyl chloride, nickel chromates, products derived from coal, mustard gas and chloromethyl ethers.

Cigarettes contain more tar and its the main reason for developing cancer. Likewise, the smoke is inhaled deeply and remains in the lungs for a long time.

Tuberculosis and some types of pneumonia often leave scars in the lung. These scars increase the person’s risk of developing a type of lung cancer called adenocarcinoma.

Some studies carried out on talc miners and millers suggest that they are at increased risk of developing talc due to exposure to industrial grade talc. This powder, in its natural form, may contain asbestos.

Other types of mineral exposure: People with silicosis and berylliosis (lung diseases caused by inhaling certain minerals) also have an increased risk of lung cancer.

Excess or deficiency of vitamin A

People who do not receive enough vitamin A have an increased risk of developing lung cancer. On the other hand, taking too much vitamin A can also increase the risk.

Air pollution may slightly grow the risk of lung cancer. This possibility is much less than that caused by smoking.

What are the Symptoms of Lung cancer?

According to the Spanish Society of Medical Oncology (SEOM), people who have lung cancer usually present the same symptoms (although this is not always the case) or symptoms similar to other non-fatal diseases.

In some cases, patients have no symptoms, and cancer is usually detected by an x-ray of the lung that is done for other reasons. However, most diagnoses occur when the tumor grows and begins to interfere with organs and structures near the lungs.

From SEOM they point out that lung tumors can generate liquids that accumulate in or around the lung, causing their collapse.

If the tumor metastasizes, patients may develop other symptoms in the lungs, bones, lymph nodes, brain, liver, and/or adrenal glands that hinder their proper functioning.

How to Prevent Lung Cancer?

Between 80 and 90 percent of lung cancers develop in smokers or in people who recently quit smoking.

“The best way to prevent the onset of the disease is to stop smoking.”

The risk of having lung cancer from a former smoker equals that of a nonsmoker.

Asbestos fibers, hair-like crystals that occur in many rocks. These are used for insulation or fireproof construction material. It can irritate the lungs. Smokers who are exposed to asbestos at work are at higher risk for lung cancer. Wearing protective equipment for breathing can reduce this risk.

Depending on the appearance of the cells when examined under a microscope. Lung cancers can divided into two types:

This type of cancer develops in smokers, ex-smokers, passive smokers, or people who have been exposed to radon.

The main types of non-small cell lung cancer get their name depending on the type of cells found in cancer:

It only develops in smokers and ex-smokers.

How Is Stomach cancer Diagnosed?

Because lung cancer symptoms often do not manifest. The disease is advanced. Only 15 percent of cases are detected in early stages. Many cases of early-stage lung cancer are accidentally diagnosed. A result of medical tests carried out for another health problem not related to cancer.

A biopsy of the lung tissue serves to confirm or deny a possible cancer diagnosis, in addition to providing valuable information to determine the appropriate treatment. If lung cancer is eventually found, additional tests will done. To determine how far the disease has spread, including:

The risk factors and symptoms presented by the patient are recorded in medical history. The physical exam provides information about signs of lung cancer and other health problems.

These studies use x-rays, magnetic fields, sound waves, or radioactive substances to create images of the inside of the body.

Various radiological studies are often used to detect lung cancer and to determine the part of the body where it may have spread. The chest x-ray is often used to see if there is any mass or spot in the lungs.

It gives more accurate information about the size, shape, and position of a tumor, and can help detect enlarged lymph nodes that could contain cancer from the lung.

They use powerful magnets, radio waves, and modern computers to take detailed cross-sectional images. These images are similar to those produced with computed tomography but are even more accurate in detecting the spread of lung cancer to the brain or spinal cord.

It uses a sensitive, low-dose radioactive indicator that accumulates in cancerous tissues. Bone scans require a small amount of radioactive substance to be injected into a vein. This substance builds up in abnormal areas of the bone that can be caused by the spread of cancer.

A phlegm sample is examined under a microscope to see if it contains cancer cells.

A needle is inserted into the cancerous mass while viewing the lungs on a CT scanner. A sample is then removed from the mass and viewed under a microscope to see if it contains cancer cells.

A lighted flexible tube is inserted through the mouth into the bronchi. This procedure can help find centrally located tumors or blockages in the lungs. It can also be used to biopsy or remove fluids that will be examined under a microscope to see if they contain cancer cells.

A small cut is made in the neck and a lighted tube is inserted behind the breastbone. Special instruments that are operated through this tube may be used to take a sample of tissue from the mediastinal lymph nodes (along the trachea and from the areas of the main bronchial tubes). Looking at the samples under a microscope can show if cancer cells exist.

A needle is used to remove a cylindrical core from the bone. It is approximately 1.5 millimeters wide and 2.5 centimeters long. The sample is usually taken from the back of the hip bone and studied under a microscope to see if cancer cells exist.

The specialist can often perform certain blood tests to help detect if lung cancer has spread to the liver or bones and to diagnose certain paraneoplastic syndromes.