6 Effective Benefits of Fish Oil, Based on Science 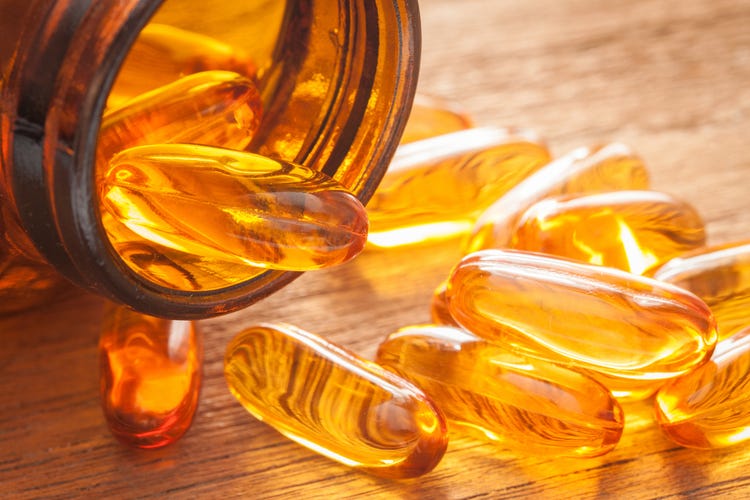 Omega-3 fatty acids have been shown by multiple studies, starting with a 1996 study by the American Heart Association. To reduce the risk of heart attacks, strokes, and abnormal heart rhythms.

Omega 3 slows the buildup of plaques in the arteries and lowers blood pressure by a small amount. Omega-3 also lowers blood triglyceride levels.

The consumption of fish oil is even beneficial after a first heart attack. There is strong evidence that increased intake of omega-3 helps to prevent the occurrence of a second heart attack . It also cure coronary ailments associated with heart disease.

There have been claims that Omega-3 has a variety of other health benefits, including alleviating the effects of Alzheimer’s, improving cognitive brain function, including that of children and fetuses in uteri, alleviating the effects of rheumatoid arthritis, and a variety of other diseases. However, more study is needed to substantiate these claims.

Medical researchers recommend consuming omega-3 through the consumption of fish, at least twice a week. However many people are not able to do this, either because of a lack of availability of appropriate fish.

Because certain fish also contains dangerous concentrations of toxic substances such as mercury or PCBs. Pregnant or nursing women in particular should avoid consuming fish that might contain these toxic substances.

In that case, the consumption of fish oil through dietary substances is considered an acceptable alternative. There is a debate about what the optimum dosage is.

But somewhere between one and three grams of fish oil per day seems to be beneficial. Such dietary supplements are readily available in pharmacies, the drug area of supermarkets, or from various on-line vendors.

Fish Oils prevent and treat many cardiovascular conditions such as coronary artery disease and heart failure. In their analysis, for example, they found that people who consumed at least 800 mg-1000 mg of Fish Oil a day.

There was a maximum of a 30% reduction in sudden death, mortality, and coronary artery disease. The study also believe that Fish Oil may help prevent worsening arrhythmias such as atrial fibrillation, but the exact mechanism remains to be identified.

In the case of heart failure, the authors found that Fish Oil reduced the incidence of death by up to 9%.

Fish Oil is also well known to reduce elevated cholesterol levels, especially, high triglyceride levels. The FDA recently has approved a drug-Lovaza, which is a more potent form of Fish Oil for the treatment of elevated triglycerides, which is usually seen in diabetic patients.

Will Fish Oils Lower Your Cholesterol?

When Fish oils are consumed daily, and the consumption of less healthy Omega-6 oils lowers the risk of strokes, sudden cardiac death, and second heart attacks.

To reduce the inflammation that causes the free radicals. Scientists say we must lower our intake of inflammatory omega-6 oils. You should increase intake of fish oils.

Fish oils can be found in salmon, herring, mackerel, anchovies, and sardines. These healthy omega-3 oils are also found in walnuts, flax seeds, pecans, and hazelnuts.

These results show potential benefits in preventing the appearance of premature cardiovascular disease in lupus cancer patients. Also, patients improved in other areas of the disease.

Food may be a part of a natural system to help the body restore its health. Many foods have been studied recently for their health benefits.

Omega-3 fish oil has received much more attention. Especially since the 60’s when it was noted that Eskimos did not experience any CVD at all and their diets were rich in fish.

Since then a variety of health benefits have been assigned to fish oil.

Omega-3 fatty acids are “good fats,”. According to the scientific studies to be one of the most important nutrients needed to maintain health and prevent specific diseases.

Omega-3’s are classified into three main types: EPA’s, DHA’s, and ALA’s. Abundant sources of EPA’s and DHA’s are found in fatty fish such as tuna, mackerel, sardines, and herring.

A study was recently done with people who were overweight. This research concluded that a combination of exercise and fish oil supplements helped to reduce body fat.

The research also indicated that cholesterol levels were improved, as well as the functioning of blood vessels.

For this study, 75 overweight random adults were chosen. These people were set into four different groups.

One group took 6 grams of fish oil each day, one took the fish oil and walked for 45 minutes three days a week.

The unhealthy cholesterol levels in the participants dropped. This research seems to indicate regular exercise, taken with fish oil, can help to get rid of fat.

*In a study of over 11,000 people with coronary heart disease taking standard medications and measures. It was found that taking 1,000 mg of fish oil per day reduced the risk of sudden cardiac death by 45% and death by heart disease by 20% (GISSI Trial, The Lancet, 1999). As cited by Pharmax.

*In a 4-year study of 815 people between the ages of 65 and 94. It was found that those who at fish once per week or more had a 60% lower incidence of the onset of Alzheimer’s than those who rarely or never ate fish (Belluzzi et al, New England Journal of Medicine, 1996). As cited by Pharmax.

*In a trial of patients experiencing Crohn’s disease. It was found that taking 2.7gms of EPA/DHA per day improved remission rates at 1 year by over 100% (Belluzzi et al, New England Journal of Medicine, 1996.) As cited by Pharmax.

ALA = Alpha Linolenic acid(One source of ALA is flaxseed oil.)

How Much Do You Need?

For the best benefits, you will need 1,000 mg per day of EPA/DHA. You would need to eat 6 oz. of oily fish to consume 1,000 mg of EPA/DHA. On days that you don’t eat this type of fish, why not take a supplement?

Side Effect of Fish Oil

A possible side effect of consuming larger dosages of fish oil is an increased risk of bleeding. There is no evidence of any danger of bleeding for dosages lower than three grams a day.
A consuming fish oil, whether through food or dietary supplements, should not be seen as a substitute for a sensible regime of diet and exercise. And, of course, before embarking on any dietary regime it is recommended that one should consult one, primary care physician.